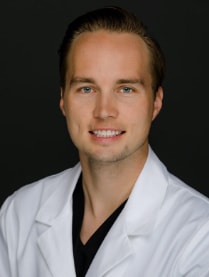 Dr. Garff earned an undergraduate Honors degree in Biology and his M.D. degree from the University of Utah. He completed his residency in Ophthalmology at Nassau Medical Center in New York, where he served as chief resident. He recently completed a fellowship in Cornea, External Disease, and Refractive Surgery at the University of California, San Diego.

During medical school, Dr. Garff was the recipient of several merit-based scholarships. As a resident, he scored in the 87th percentile of his peers in the American Academy of Ophthalmology Knowledge Assessment Program exam. He has been extensively involved in research throughout his medical career. In medical school, he received an NIH (National Institutes of Health) grant to study ocular blood flow in glaucoma. Dr. Garff has also had multiple peer-reviewed publications on cataract surgery, diabetic retinopathy, ocular pharmacology, and dry eye. He has presented research and lectures to his peers at national conferences, as well.

Dr. Garff is a member of the American Academy of Ophthalmology and the American Society of Cataract and Refractive Surgeons. He utilizes the latest techniques in cataract and refractive surgery — including multifocal and Toric intraocular lenses, dropless cataract surgery, LASIK, and PRK. He also performs complex anterior segment surgery techniques, including scleral-fixated intraocular lenses and iris repair. He is trained in both full thickness and endothelial corneal transplants, including the latest technique, Descemet Membrane Endothelial Keratoplasty (DMEK). Dr. Garff also provides care for dry eye, pterygium, ocular surface tumors, Fuchs’ dystrophy, infectious and inflammatory corneal disorders, diabetic retinopathy, and glaucoma. Additionally, he is fluent in Spanish.

To meet with Dr. Garff regarding your vision care needs, please contact our practice today to schedule an appointment.